Greg Rusedski beat Thomas Enqvist on Saturday to be crowned champion at the Brodies Invitational in front of packed stands at the Gleneagles Arena.

Rusedski clinched the title with a 6-3, 6-4 win over Enqvist in a thrilling finale to the two-day legends tournament, organised by Brodies LLP and hosted at The Gleneagles Hotel.

Former British no 1 Rusedski, former world no 1 Mats Wilander, former world no 4 Thomas Enqvist, former world no 19 Xavier Malisse and Scotland’s national coach Colin Fleming treated over 1,000 tennis fans to an exciting display of volleys, backhands and aces, while former British No. 1 Tim Henman and former Fed Cup Captain Judy Murray were also there over the weekend to join in with the fun and to share some of their tennis expertise with players and families.

For the first time this year, the Brodies Invitational was part of the ATP Champions Tour, a global tournament for former champions that spans London, Mexico City, Seoul, Stockholm and Palma de Mallorca.

Rusedski said: “It’s been a long time since I won one of these ATP Champions Tour events. It’s nice to be back in the winning circle but for me it’s all about being with friends on the tour again.

“It’s great to play in a tournament with Thomas, Mats, Xavier and Colin, and Tim was here as well.

“I am thrilled to have won today but it’s also about taking part. Brodies and Gleneagles deserve a Champions Tour event, having run this tournament for a number of years.

“Every year it gets better and better and this year we had packed crowds on the Friday and Saturday. What more could you want?”

The Brodies Invitational tournament also encouraged grass-roots involvement in the game, with Judy Murray delivering a family fun tennis session to competition winners, as part of her Tennis on the Road programme.

Bill Drummond, Managing Partner of Brodies, said: “It’s been just great to see the legends in action again and I’ve really enjoyed watching Greg, Mats, Thomas, Xavier and Colin, as well as some of Scotland’s rising tennis stars, show off their skills on the court over the past two days; the addition of the ATP Champions Tour this year has certainly given the event an extra competitive edge, something these great athletes clearly relish.

“I hope that everyone who has attended over the past two days has enjoyed the tournament and the opportunity to watch tennis stars compete in a world-class location. I would like to thank all the players for entertaining us with their skills, and I’d also like to thank the tennis fans who attended and helped to make this year’s Brodies Invitational another great success.”

“The ATP Champions Tour spans many iconic locations across the globe and Gleneagles was an ideal venue to capture the excitement and lively atmosphere of the competition.” 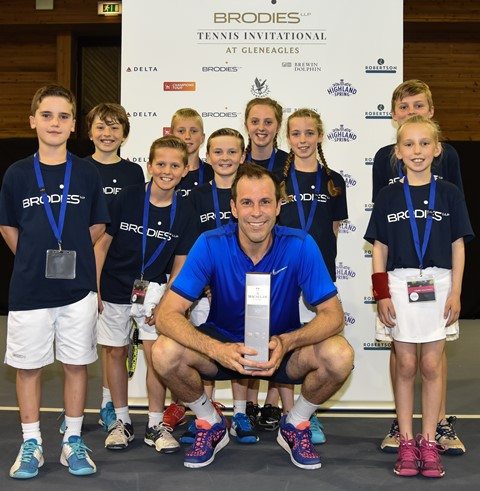